How I skyrocketed my productivity with this simple trick

When I was a teen I used to measure time in songs. It took me just under 2 songs to walk to school. I’d listen to 12 – 13 songs when I’d walk my cousin’s dog (we had a cat) and I joined Les Mills so I knew exactly how long till the next exercise and the end of the class cos the playlist was always the same.

Does music help you study?

The other day I had the radio on in the car when Toxicity came on, and suddenly I had a flashback to my teen years. System of a Down just released the new album and I was listening to it on repeat as I was studying for a biology exam. On my bed, cos I thought it’d be cool to ruin my back by crouching down. An image fleshed in front of my eyes as I was driving – a stylised image of the brain and neuron connections that looked like spiders with big round slippers on their long thin legs.

This not only made me question my workspace and music choices, but really made me think about those brain connections and how music affects cognitive performance as well as how does music help you focus.

My art teacher used to play classical music during class. He said classical music enhances our ability to focus and since it was a very technical class where creativity was not required, focus really did matter.

Creativity is needed when creating something new, but when recreating a realistic object you want to keep that beast at bay. We were trying to master perfectly straight or perfectly curved and even lines to create perfect (did I say perfect before?) geometric shapes and then we’d have to shade them with insane accuracy to give them that 3D effect – so yes, we needed focus, and a certain tendency for mazohizm to make that happen.

Does music help you focus?

A University of California study from 1993 reported the Mozart effect for the first time. They asked individuals to listen to Mozart’s sonata and cross referenced their spatial reasoning skills with a group who listened to relaxation music and a silent group. Those who listened to Mozart showed increased spatial reasoning skills in the next 10-15 minutes.

Since 1993 several studies have been conducted to further understand the Mozart effect and since then it’s been confirmed that listening to Mozart enchanted brain function even in mice and they also researched the Vivaldi effect.

It’s not that I don’t like Mozart as a person, I just never enjoyed classical music. And I don’t know anyone under 50 who does. Do you?

Is the ‘younger’ generation missing out on some brain juice? Not at all!

It turns out that the Mozart effect has very little to do with Mozart, and a lot to do with frequency.

Best music to help you focus

Mozart increases alpha waves in our brain, but he’s not the only one! You can also boost alpha waves by practicing yoga and meditation or by indulging in some good ol’ daydreaming. Or you can listen to modern-day alpha jammed music of your preference.

The mere exposure theory says that the more we are exposed to a certain stimulus, the more we grow to like it. This applies to more than just music but it is particularly powerful when we want to use music to increase our cognitive abilities.

Listening to music on repeat has become a common productivity hack and helps us dissolve with music and keep our monkey mind at bay. Listening to a song (or very short playlist) on repeat can help us get into the zone and helps us focus as music becomes repetitive and predictable.

I didn’t realize it at the time, but listening to Toxicity on repeat made my brain lock in the information I was studying with the music I was listening to. Hearing that song again years later initiated context-dependent memory and made me remember the material I was studying back then.

Context-dependent memory refers to ‘improved memory’ or a better recall of certain information or events when the context (or circumstances) is the same for both the original encoding (the memory) and retrieval.

This is a powerful principle we can use to boost our memory, performance and get things done.

Listening to music on repeat really helps get into the zone faster as the music creates a cue that helps the brain switch the focus mode on. This cue becomes stronger the more you work while listening to the same music.

When listening to a single song or a short playlist on repeat, the music soon becomes background noise that eliminates distractions but at the same time sets the rhythm and boosts alpha waves that help with cognitive performance.

Not all songs are created equal. So what kind of music helps you focus best?

Alpha waves increase our cognitive capabilities and listening to alpha waves nudges our brain to sync in.

But there is also a correlation between our music preferences and performance. As well as lyrics and performance, since music with lyrics can be distracting when writing or reading.

I tend to listen to upbeat electronic music while working. Psychedelic music is great for those yummy alpha frequencies so my playlist often leans that way. Funny thing is that I only listen to psy music while working and on bush doofs and absolutely hate it otherwise… go figure.

previousHow to plan your day and stick to it – take back control!
nextHow to set goals and crush them – 5 ways to achieve your goals 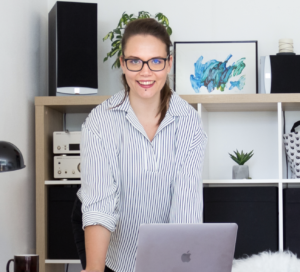